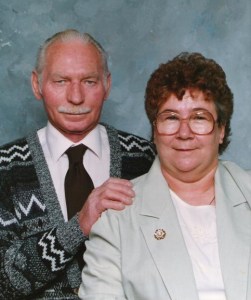 Gracie Cole, 76, formerly of Bourbon, passed away with her family by her side at 9:18 p.m. on Monday, January 5, 2015 in her home on Pennsylvania Avenue in Plymouth. Born in Gould City, Michigan on June 29, 1938, Gracie was the daughter of Alvin and Marian Etoile (Griffith) Allen. On December 9, 1954 in Manistque, Michigan, Gracie married Willard F. Cole. He would precede her in death on August 26, 2006. In 1988 at the age of 50, Gracie went back to school and attained her GED in Rochester. She worked as a laborer at Murphy’s and Ristance in Bremen. Gracie loved spending time with her family. She was also a member of the Moose Lodge in Plymouth. She is survived by a daughter: Gretta G. Anderson of Plymouth, a son Willard F. and Kim Cole, Jr. of Plymouth and daughter in laws: Beverly Cole of Argos, IN, and Pamela Cole of Plymouth, IN. Also surviving are 14 grandchildren and 18 great-grandchildren, two brothers: Pat Allen and Russ Allen, both of Delong, IN, and a sister, Bonnie Lee of Culver, IN.  Gracie was preceded in death by her husband, parents, sons: Timothy L. and Kim L. Cole, and siblings: George “Butch” Allen, Anna Mae Cole, Rex Allen, Sr., Rosman Maxon, Francis Griffith, Georgia Ash, Barbara McAlpine. A memorial service will be held at a later date. Gracie, her husband Willard and their son Kim, will be laid to rest together in the New Oakhill Cemetery at a later date. Funeral Director – Caryn E. Escher – Caryn@Johnson-Danielson.com Attn Allen/Cole Families/Friends: Memorial Service will be held at Garden Court East Apartments in the Community Room – (date will be posted soon once arrangements have been made) All family and friends are invited~ Please share to get the word out~ Address: 501 Pennsylvania Ave. Plymouth, Indiana, 46563-2772 (574) 935-5027 Burial will be done in the Spring at New Oakhill Cemetery where Grace will be buried with her husband Willard Cole & son Kim Cole ~ (all have been cremated & ashes will be buried together) Gifts will be passed to Grandchildren & Relative’s after memorial services~ For all flowers, cards and such please contact Gretta Grace (daughter) or Hollie Marie (Granddaughter) Johnson –

Note from Coni: I just spoke to Gretta and they have already put out the newspaper with Graces obit – 2 of her deceased siblings are missing in the obit – (brother) Rex Allen Sr. & (sister) Roseman Maxon – Gretta was having difficulties remembering all of them (11 total – only 3 are with us now) much on her plate and know things are tough for all them right now~ the obit on the funeral home will have the correct info once they are able to get it in – but the newspaper has already been printed.

Note from Coni: Aunt Gracie was my Father’s sister – she is the 7th of the 11 Allen/Nallet/Griffin children to pass away~

Narratives of the Fischer, Knight, Clarke and Gilbert families

"Get your edges TWICE as SHARP"
Jessica's Family Tree