Hello y’all – I’m on the hunt for proof that William Preston Wilson Sr, was in the Revolutionary War… by all written accounts that I have found he was in the Battle of Monmouth & was injured there….

I will let you know what I find 😉

Hello! I am so very excited to be asked to contribute my family’s story’s & facts.   I have done genealogy since 1991, when my U.S. History teacher gave us an extra credit assignment of finding our ancestors… I believe I’ve always loved learning about my history.  I remember going around to graves with my paternal grandmother hearing her tell me stories about her family, asking questions & help take care of the graves.

The following was a post I posted on my blog http://sheritasgenealogy.blogspot.com/ back in March of this year… I hope you enjoy it.

…Some in Michigan are Living…

Calling me back “home,” beckoning me is a little piece of land. Ironically it is called Barkhamsted Lighthouse. I ponder the inhabitants of the Lighthouse “Tribe” even thought what it’s name would mean to those coming after them. To me it is a beacon deep in my heart. A passion that was my mother’s and my grandmother’s to stand where the Websters & Chagum’s once stood. To see the old cemetery & foundations of the homes, that are barely noticed today. To somehow feel their presence from the past. To visit the town’s Historical Society and Records vault, to find my ancestors name in some forgotten record.

It all starts with JAMES CHAGUM and MOLLY BARBER.

James Chagum, son of Great James Chagum and Jane/Priscilla Sands, was born in Jun 1710 in Block Island, Washington County, RI. James went to worked as a gardener for Molly’s father. Other notable events are; Land Grant: 1760. “James Chaugham being awarded a land grant in 1760 by the British Gov. of GT.”, Military Service: Possible that he served in the French Indian Wars. Molly Barber was born about 1714, uncertian where, some reports of Ireland others Wethersfield, CT. Her father’s name could be Peter Barber, but it is unknown. In the 1800, Litchfield County, CT. “Mary Chaugum, P. 32, with 1 Female-over 45, 3 free persons in family”

The story goes that Molly had many male callers, she fell in love with a gentleman caller, and her father denied them to get married and locked her up on their grounds, the gentleman then moved out west. James seeing Molly so sad gave her a rose from the garden and a friendship blossomed. They eventually fell in love and decided to run away so they could be together. Molly’s angered father chased them from Wethersfield, CT into an Indian village near Barkhamsted, were he passed right by Molly and didn’t even recognize her. Molly and James fearing that they’d be descovered then settled in the mountain range around Barkhamsted where they flourished. They had 8 children in all; Two boys Samuel who married Miss. Green of Sharon, CT and Solomon who married Miss Hayes & now I have found that he may have also married a Ms. Sophia Bills (Webster) who died while giving birth on 3 Mar 1848 in Kent, Litchfield County, CT. Six girls, two who never married Elizabeth who died in 1854 and Sally who died young. Meribah (aka: Mary) who married Samuel Lawerence. Hannah Sands who married Ruben Barber in 1784. Mercy married Isaac Jacklyn. Mary (aka: Polly) married William Preston Wilson Sr, who was a preacher (some say Baptist) and a school teacher, he also served in the Revolution War, he was lame possibly from battle of Monmouth.

William P. Wilson Sr & Mary/Polly Chagum lived at the Lighthouse site, & had 4 known children; Susan (b. 1795) married Daniel F. Clarke, Esther (b. 1796) married David Haskell, Polly (b. 1771) married Joseph Elwell Sr. [I have found 6 children for them, one who is Sybil Elwell who married Montgumery Webster, who was the father of Solomon Webster], and finally their only son William Preston Wilson Jr, (b 1799) married Harriet Wilson – daughter of Eli Wilson & Huldah Wadsworth Cook. [I have found 5 children for them one of whom is Mary Wilson who married Solomon Webster the son of Montgumery Webster]. 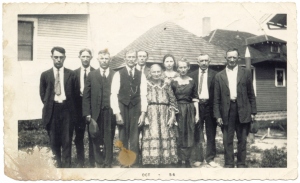 Bert is my great grandfather, his daughter Edith Webster married Roy Lash, her daughter was Ruth Ann Lash who is my mother.

I hold in my hand two wonderful books. The first one is A Village of Outcasts: Historical Archaeology and Documentary Research at the Lighthouse Site by Kenneth L. Feder. GoodReads calls it “A fascinating story of Native Americans, freed African-American slaves, and assorted European outcasts who came together and established a settlement that thrived from 1740 to 1860, this case study integrates the history and archaeology of a multicultural, multiethnic New England village.” I have had the book since I purchased it from Walt Langraf in May of 1998. At that time I was still in college & had limited time to read it, I have recently started reading it again. The book talks about Archaeology terminology & a basic knowledge of Archaeology. It also talks about my second wonderful book “The Legend of the Barkhamsted Light House” by Lewis S. Mills, MA. , which is written in the style of The Song of Hiawatha by Henry Wadsworth Longfellow.

In Feder’s book is more factual, while Mills’ book is more “romantic” – both are prized possessions of my collection of family heirlooms.  Not only do I treasure the information in those books & the papers I received back in 1998, I treasure the friend I had in Walt Langraf, I know that this world is a little bit darker now that he is no longer with us.

One day in the near future I hope to step onto this Valley where my ancestors lived & loved. One day I hope that my children can see the importance of history. The song by Cher, “Gypsy’s Tramps & Theives” keeps running through my head; James Chagum was considered a run-away servant, he & his brave wife Molly Barber was considered outlaws…

In Lewis S. Mills book, “The Legend of the Barkhamsted Light House” page 93 he writes…

“Molly Barber and James Chaugham
Dead and Buried-gone forever:
Scattered now are their descendants.
Some are in the Town of Woodbury
Busy digging graves and hunting;
Some in Riverton and Colebrook
Some in Harwinton and Winsted,
Some in Michigan are living.

… Generations speeding onward
In an ever widening circle,
Carry far the blood of Chaugham
And his spouse, brave Molly Barber…”

My family are part of that “…SOME IN MICHIGAN ARE LIVING….”

WELCOME SHERRY! So glad to have you on board!