Brian Jones sent this to me. Incredibly cool.

The charcoal kilns are perfect and a few of the cellar holes are clearly visible.

When I was 3 years old (1970) I had a cousin born named Kenny Gilbert Jr.
He was suppose to be the son of my Mother’s Brother Kenny (Sr.) & wife Nancy Gilbert…  Kenny Jr. and I grew up around each other and stayed close thru the years – I consider him one of my dearest friends and closest relative and now I am proud to call him Brother!!!!
ABT a month ago we had a DNA test done (familyteedna.com) for Kenny Gilbert Jr.  REASON being…. THRU the years there was always talk of Kenny Jr. actually being my Father Rex Allen (Sr.) Son…..  So with this I am bringing our “family secret forward”
I want to note: this is not to hurt any of our families… but was to finally prove one way or other and without a doubt we are 1/2 siblings~
Here goes: My father (Rex Allen) had an affair with my Mother’s-Brother’s (Kenny Gilbert Sr.) Wife Nancy many years ago…. Kenny Jr. & I have known it was a “possibility” and Kenny Jr. & I have ALWAYS been close regardless…
Kenny Jr. recently visited me here in Louisiana (been a few yrs since we’ve seen each other) once he stepped out of his truck I was shocked to see my father in his face – mainly the eyes~ The possibility became reality to me AT THAT MOMENT… I had no doubt he is my father’s son & MY BROTHER… all we had to do was prove it~ My Mother & her brother found out abt the affair and forgave them both for their infidelity…. my Father Rex Allen thou never admitted to being the biological father to Kenny… was always whispered abt and a secret in our family…. until today~ With DNA we have proven that Kenny Gilbert Jr. is my 1/2 brother by my Father Rex Allen and Nancy Gilbert. 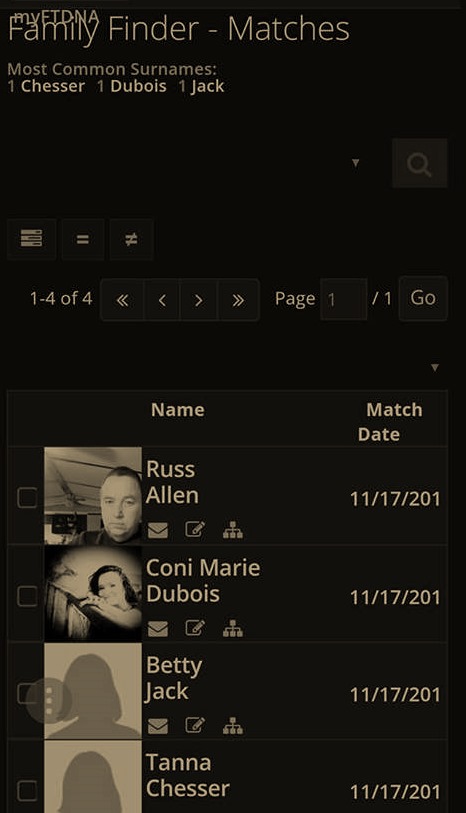 1st on list to match Kenny in the Family finder is My Uncle Russ Allen
Him & Kenny share 1,955 Centimorgans
and 2nd on list is ME – Kenny & I share 1,940 Centimorgans!
He is also match to my cousin Tanna Chesser (All ALLEN SIDE’S)
Kenny should have NO MATCHES to the Allen’s if not an Allen!
(He should be Maternal side only)
States I am his 1/2 sibling~