In the December issue of the Lure the story of “Pahke’s Cave, the Home of Orrin Wright,” was related as told by the late David Gaines of East Hartland.

Since that time Harold Thorne reports a number of groups have visited the ancient and historic cave.
On October 24, 1941, the Clearview School from Harwinton with their teacher, Florene B. Smith, visited the cave and with them was Mrs. Elnora Snow of West Hartland. Mrs. Snow is the daughter of John Hoadley Miller who was first selectman in Hartland in 1854 when he took the children from Pahke’s Cave. Mrs. Snow related the story of the taking of the children of Orrin Wright from Pahke’s Cave as it had been told her.

“On the very day my father was elected first selectman as per final count of the votes late in the evening, the other two selectmen urged my father to get Orrin Wright’s children from the Cave at once. My father hesitated, but they finally persuaded him that he should act immediately, so, without going to his own home, he drove with his horse and business wagon over to West Hartland and as near the Cave as possible, though almost a half a mile away. He then followed the narrow trail to the Cave and as First Selectman informed Mr. and Mrs. Wright that the children must go with him as they were receiving no schooling and were receiving very poor care in such a hole. Mr. and Mrs. Wright very sorrowfully gave up the ten children and Mr. Miller took them to his home.

Now Mr. Miller had but recently been married and in addition he had not consulted his wife before he went after the children, so when he arrived with the ten, long after dark, he had two very serious problems on his hands – his wife and the ten children. Finally the children were quartered in the attic for the night. What to feed them was another problem but mush and milk solved this. In the morning John, one of the children, was gone and Mr. Miller was not to be found. After breakfast of mush and milk, Mrs. Miller decided, with her mother, to take the horse and wagon and spend the day at Hartland Fair, for Hartland had a fair of its own each year in those days. The day passed very pleasantly, but when they were ready to go home, their horse and wagon was missing.

After a very long wait Mr. Miller appeared with the horse and wagon saying he had spent the day finding homes for the children and that all but one was placed out.” Some of these children are still living as successful as others who had better opportunities when children. The water, as storms sweep the lonely hillside, has washed dirt and rubbish into the Cave so the room inside is not as large as it was one hundred years ago when Pahke and her tribe his in its depths from the hungry wolves.

Orrin Wright and his wife found the cave a lonely home with the children gone and were soon persuaded to move into a house “made with hands.” 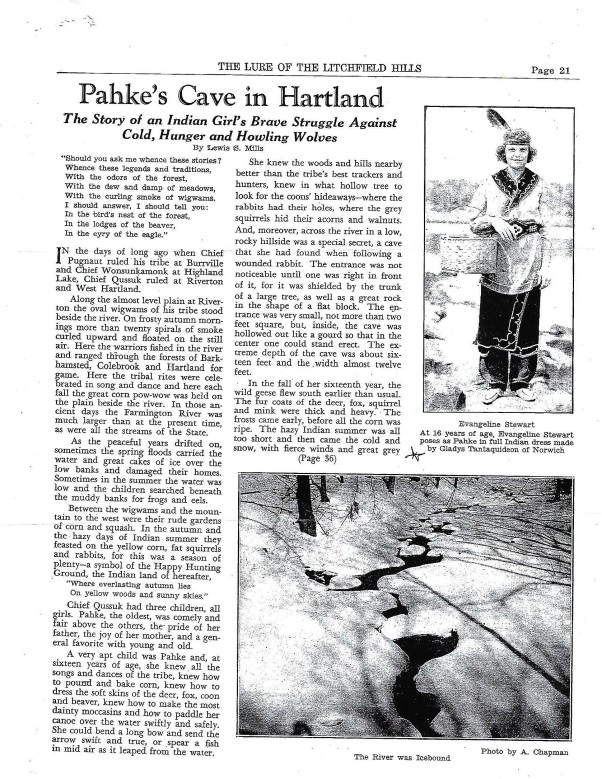 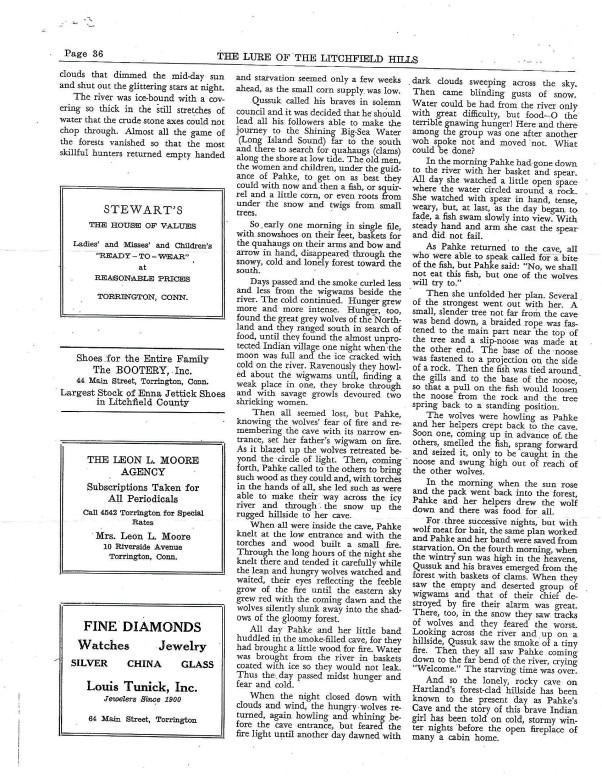